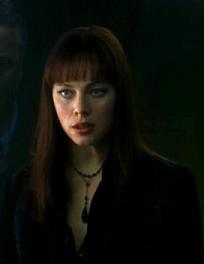 Personal demons:
Her estranged daughter was murdered by a neo-nazi. She was then denied custody of her grand-daughter, leading to something of a breakdown.


Quotes:
"Some men GO to the theatre, some men ARE the theatre." Lady Heather in a conversation with Grissom.
"The rage was more than the repulsion. People have had sex for much less worthy purposes." (On why she had sex with Zoe's killer, whom she thought was Dr. Wolfowitz.


Grissom: "No man is a complete mystery except to himself, Marcel Proost"
Lady Heather: "I'll bet he would have enjoyed himself here."

Lady Heather: "So you do you survive?"
Catherine replying Lady Heather's earlier answer to her questions replying "by knowing myself, and working hard, and by not taking any crap from powerful jerks used to giving it all day long,"


Facts:
Lady Heather has Type 1 Diabetes (uses a pressure syringe)
Attempted murder-for-hire on herself failed, as she felt she had no reason to live.
Zoe had a baby (Allison) as the result of an affair with her therapist, who was married. Heather officially complained and got his license revoked, Zoe stopped speaking to her mother.
Lady Heather, in order to procure a DNA sample for Grissom, had sexual relations with whom she thought was Dr. Wolfowitz, but instead was his twin, Johann Sneller. Lady Heather tried to gain custody for Allison but was denied by the court. This in spite of selling her Dominion House and attempting to show proof she was a suitable guardian.

Relationship:
Grissom spent the night with her..
Lady Heather HAD a daughter (Zoe) who was enrolled at Harvard University.
Jerome Kessler (Lady Heather's ex) may be allowing visitation with granddaughter Allison, perhaps over guilt of $850,000 trust fund set up by LH and obtained for her murder/suicide). For whatever reason, Lady Heather will survive and grow to be an active part or Allison's life!

<< Back to Recurring Characters