<< Back to CSI Library

IDW has published many CSI comics and graphic novels, and they've been published from 2003 to now.

Old Las Vegas crashes against new, high-tech crime busting as two separate cases make life tough for America's favorite CSIs. When an Elvis impersonator disappears and a mobster's life is threatened, only science and smart criminalists can save the day.

#1 Bloody Bonnet
The CSI miniseries finds a serial killer on the loose in Las Vegas. The CSI team soon discovers the unique aspect of the case - the killer seems to be reenacting the crimes of Jack the Ripper. Armed with the knowledge of the Ripper's crimes, Grissom tries to prevent history from repeating itself. Complicating matters is the fact that there is a Jack the Ripper convention in town, meaning hundreds of possible suspects! The team must work fast, as the clock is ticking...

#2 Ripper Mania
Modern day Las Vegas has a very familiar crime streak on its hands: someone is recreating the crimes of Jack the Ripper. Two have died so far, and it's up to Grissom and the CSI team to prevent any more murders from occurring.
The advantage gained by Grissom's recognition of the Ripper pattern is soon negated by the news that there is a Jack the Ripper convention in town. Now the CSI team has almost 150 potential suspects, all with intimate knowledge of the Ripper's crimes. With the convention ending in a week, time is short for the CSI team to solve the mystery before the Ripper claims his third victim.

#3 New Jack City
The CSIs deal with a copycat killer who's imitating Jack the Ripper, and Grissom is determined not to let history repeat itself. As he, Catherine, and Warrick do their best to out-think the new Jack, another dead woman is the object of Nick and Sara's attention... or are they all after the same killer?

#4 Don't Know Jack
Gil Grissom, aided by Catherine Willows and Warrick Brown, has finally interrupted the cycle of the Jack the Ripper copycat killer, and the evidence is beginning to mount -- from a bat-shaped bruise to a prize-winning pooch. But can the CSIs put the puzzle pieces together before a madman rips again?

#5 Jack Be Nimble
Two grisly cases come to riveting conclusions, as Sara and Nick bag the dumpster murderer, and Grissom, Warrick and Catherine close in on the serial killer whose Jack the Ripper slayings have terrorized the city and embarrassed the department. Is the killer a Ripperologist convention goer, related by blood to one of the original key Whitechapel suspects? The answer lies with a fiend whose motives may mirror the real Saucy Jack all too closely.

1: Rotten Rules
Rapper Busta Kapp has no shortage of enemies, so when he turns up dead in his limo, Gil Grissom and his crew of CSIs have no shortage of suspects.

2: Crime Seen
Who busted a cap in rapper Busta Kapp? The CSIs have no shortage of suspects, from East Coast rival Beatmaster Uzi to the midwestern whitebread father of Busta's dead-by-overdose girl friend -- not to mention the West Coast street gang Busta was stiffing. Features two unique covers!

3: Lipstick On Your Collar
With gang violence in the air, Grissom and his CSIs -- investigating the murder of gangsta rapper Busta Kapp -- follow the forensics trail to the music industry itself, where rivalries are number one, with a bullet.

4: Gris Gone Wild
In Las Vegas’s white-hot music scene, the bodies are falling faster than the career of yesterday’s pop sensation. If the CSIs can’t find the killer—or killers—there won’t be anyone left to pay the piper!

5: Rap Up
Every tune reaches an end, but this one hits a few sour notes for some of Vegas’s punk rock music scene. As Bad Rap hurtles to its startling conclusion, only the clues can be trusted, and then only if Grissom’s team can interpret them correctly. 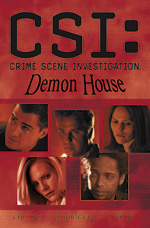 1: Fright Night
When a real body turns up in a charity haunted house, the members of Las Vegas’ CSI team—already busy on a series of armed robberies—finds themselves pulling double duty.

2: Magic Town
An apparent accident in a "haunted house" may be homicide after all—and a mourning fiancée looks like the prime suspect. Meanwhile, what looks like the latest in a series of home invasion robberies has the Crime Lab hopping.

3: Curtains for Joanna
When the Demon House turns out to be a veritable maze of secret passages and escape routes, the Vegas CSI’s have their work cut out for them trying to investigate a crazy crime scene. Meanwhile, a series of robberies grows more violent. Will Grissom and crew find the culprits before more victims are added to the list?

4: Quarterback Sneak
The Las Vegas CSI’s come closer to solving the series of convenience store robberies that has plagued the city—but with each step toward solving that crime, the solution to the double crimes—robbery and murder at Demon House—seems farther away. Grissom and company have to find the real answers or let a killer go free!

5: Just Say No
What do an armed robbery at Demon House, a series of convenience store robberies, and a murder have to do with one another? The clues are all there and the evidence never lies—but the reader will be guessing until the very last twist is revealed. The official comic book version of TV’s most popular drama wraps up another exciting story in this special issue! 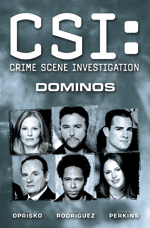 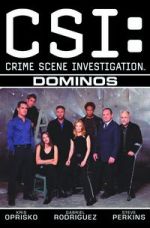 CSI: Dominos 1
When gang war in Las Vegas leaves bodies all over town, clues point to a ruthless murderer—one who may be the most terrifying foe Gil Grissom and the Las Vegas CSI team have ever faced. The bodies pile up fast in the newest miniseries based on TV's number one show!

CSI: Dominos 2
The corpses continue to pile up, leaving Gil Grissom and his team with ever more evidence to sift through. All the clues point to a killer who might just be the most vicious Gil has ever gone up against—but that only makes him more anxious to solve the case!

CSI: Dominos 3
Yet another killing in a long chain of them leads Grissom and crew toward plastic surgery clinics—all the rage in Las Vegas, among showgirls and mobsters alike. But whose ultimate makeover is being investigated here? And will the CSIs find out the truth before the chilling assassin puts any more notches in his gun?

CSI: Dominos 4
A bloody mob killing has started a long chain of murder, and all the clues lead Gil Grissom and his team to a plastic surgery clinic. Pieces of the puzzle start to fall into place—but will knowing why the killer is stacking up the victims help the CSI team stop him?

CSI: Dominos 5
Gil Grissom and his team have followed the trail of a grisly mob killing to a plastic surgery clinic and beyond. But it all comes to a head here in this explosive final issue, and not in the way Grissom expects.

CSI: Secret Identity 1
When a tourist is murdered in a cheap off-strip motel, the investigation is surprisingly routine, until it’s complicated by a missing videotape and an imploded casino. The trail of evidence points to a man who died twice and left two different corpses, engulfing Gil Grissom and the CSI team in a quagmire of deceit and treachery that stretches back 20 years—and still threatens them today!

CSI: Secret Identity 2
As Grissom and his CSI team investigate the discovery of a body amongst the imploded ruins of a Las Vegas casino, they start to piece together a larger mystery. However, they soon realize this case holds decades-old secrets that threaten to explode in the present if they don’t solve the murder before the body count rises further!

CSI: Secret Identity 3
The discovery of a burning coffin in the desert leads Grissom and his CSI team inside a prison as their search for clues in this latest string of murders takes an even nastier turn! Will they figure out this mystery in time to prevent new murders?

CSI: Secret Identity 4
The discovery of a burning coffin in the desert leads to more questions for Grissom and his team. It also leads to an increasingly complicated and puzzling murder conspiracy that the CSIs are desperate to solve before more bodies start piling up.

CSI: Secret Identity 5
The 25-year-old secret of the twin corpses is finally revealed, as the CSI team descends into a world of treachery, manipulation, and paranoia. But the case still has one final, unsuspected twist, with evidence surfacing that implicates one of their own.

CSI: Dying in the Gutters #1
Presenting a collection of the hit CSI miniseries set firmly in the world of comics, sure to appeal to comic book fans and CSI fans alike! Grissom and his team of CSIs take in a Las Vegas comic convention that ends in tragedy - the death of online gossip columnist Rich Johnston. The suspects are many—among them Marvel Comics' Editor-in-Chief Joe Quesada, Ed Brubaker, Stan Lee, Marc Silvestri, Robert Kirkman, Peter David, Greg Rucka, and many other well-known comic creators! Can the CSIs solve the crime before "dead is dead" becomes commonplace at the con?

CSI: Dying in the Gutters #2
Comics gossip columnist Rich Johnston was electrocuted in front of Grissom’s eyes. The suspects has grown—from Joe Quesada to other real-life comic creators such as Jim Mahfood, Gail Simone, J. Michael Straczynski, and more. Are comic books really the cause? And can the CSIs solve this murder before an even worse tragedy strikes the convention floor?

CSI: Dying in the Gutters #3
Comics journalist Rich Johnston lies dead at a Vegas comic convention, and the suspect list of creators only grows. This issue, the list expands to include Andy and Adam Kubert, Phil Jimenez, and George Perez. And most suspicious of all, what is comics legend Stan "The Man" Lee doing lurking around the crime scene? The comics-related intrigue continues as the CSIs narrow down the search for the killer!

CSI: Dying in the Gutters #4
The comic-related intrigue continues as the CSIs narrow down the search for the killer! All signs point to Marvel Editor-in-Chief Joe Quesada as being guilty of murder, but is dead really dead in this case? And what do other suspects like Greg Rucka, Gail Simone, Peter David, and other comic pros know about the murder of Rich Johnston? The penultimate issue of murder at a comic con!

CSI: Dying in the Gutters #5
As the CSIs circle in on Rich Johnston's killer, new evidence comes to light that might change everything. Does Joe Quesada mean it when he says "dead is dead"? Which comics industry professional is really guilty of murder? All will be revealed in the concluding chapter of this latest CSI mystery. 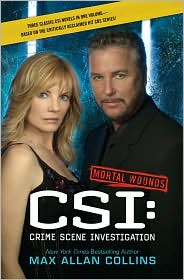